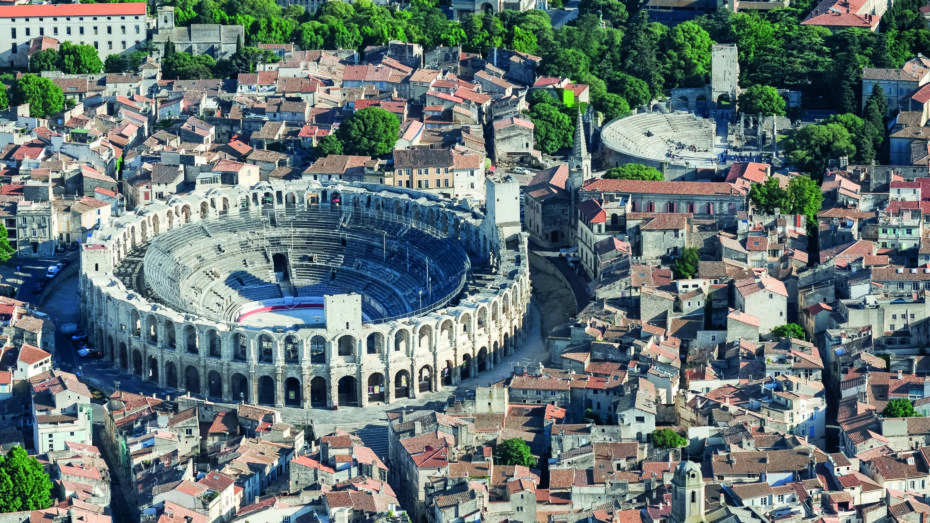 After Rome, there is Arles, a city on the UNESCO World Heritage List! The Roman heritage of Arles is unique and can be seen around every corner: amphitheatre, theatre, Constantine’s baths,

cryptoporticoes, Alyscamps. Other remarkable witnesses, the buildings of the Romanesque period are superb, such as the Primatiale and the St Trophime cloister….

The entire old town is listed as a UNESCO World Heritage Site.

The museums of Arles, real jewel cases, are doubly worth the diversions: it is in a contemporary building that the Museum of Ancient Arles presents 1,800 objects (everyday objects, architectural elements, mosaics, sarcophagi, models, etc.). A visit to this place is a must to better understand the evolution of the Roman city, where you will be dazzled by a 31m Gallo-Roman barge fished out of the Rhône as well as by the famous bust of Julius Caesar.

After ten years of work, the ethnographic museum created at the end of the 19th century on the initiative of the Provençal poet Frédéric Mistral, a reference for Provençal culture, has reopened its doors. With a collection of more than 38,000 objects, the Museon Arlaten shows us the ways of living, thinking and working in the region since the 18th century.

The Vincent van Gogh Foundation in Arles pays tribute to the master and to leading contemporary artists. It is dedicated to enhancing his artistic heritage by questioning the resonance of his work in art. Putting his paintings into perspective with the work of contemporary artists will reveal a fertile dialogue.

The Fondation Luma Arles is located in the Parc des Ateliers, a former railway wasteland covering an area of 11 hectares. LUMA Arles is a unique place where the LUMA Tower designed by Frank Gehry and seven former factories from the 19th century industrial heritage interact in perfect harmony. Conceived as a journey through the region by the fauna and flora that inhabit it, the 4- hectare landscaped park is a place of life, exchange and leisure open to all.

The Camargue Museum between Arles and Les Saintes Maries de la mer, in the heart of the Camargue, is a real gateway to the discovery of this vast territory. It is at the Mas du Pont de Rousty that the Natural Park has installed the Camargue Museum, a showcase for the territory. Renovated in 2013, with a view to sustainable development, the sheepfold, under its original framework, offers an immersion in the Camargue of yesterday and today. Historical pieces, interactive, playful and sound installations, videos and contemporary works of art invite young and old to surf between past, present and future, far from clichés.

To discover Arles, go to the Tourist Office! You can buy your advantage pass (valid for 6 months to access 6 monuments and 3 museums) or Liberté (valid for 1 month to access 4 monuments, 1 museum and the Réattu Museum).

Throughout the year (according to the calendar), guided tours and historical re-enactments are offered in the city centre and in the Camargue, in the monuments, museums and foundations. For those who prefer to visit on their own, themed walks and hiking maps are available online or from the tourist advisors.